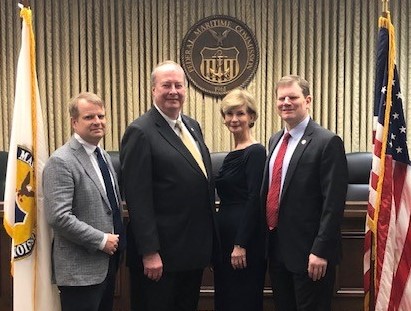 Commissioner Sola served on the Florida Board of Pilots Commissioners and presided on the probable cause panel for maritime incidents. Previously, he was a Senior Sales Executive with Campers & Nicholson International and is a licensed international Ship Broker. He served as a consultant with Arden & Price authoring studies for the Inter-American Development Bank during the United States handover of the Panama Canal. Additionally, he served as an Adjunct Professor at Florida State University-Republic of Panama. Commissioner Sola is tri-lingual and a two-time graduate of the Defense Language Institute, Presidio of Monterey. He served as a Strategic Debriefer for the United States Army Intelligence and Security Command and subsequently in Counter Intelligence with the United States Southern Command. Commissioner Sola earned his B.S. in Management from the Nova Southeastern University and M.S. in International Finance from the University of Illinois.

Commissioner Maffei most recently served as Professor of Practice at the George Washington University Graduate School of Political Management. Previously, he served two years on the Federal Maritime Commission and two terms in the United States Congress representing portions of upstate New York. During his time in the House of Representatives, he served on the Armed Services, Science & Technology, Financial Services, and Judiciary Committee and was the Ranking Democrat on the Science and Technology Oversight Subcommittee. He has taught at the New York State College of Environmental Science and Forestry and was a Senior Fellow at Third Way and the Center for the Study of the Presidency & Congress. Prior to his service as a Member of Congress, Commissioner Maffei served in senior staff positions for Senator Bill Bradley, Senator Daniel Patrick Moynihan, and the House Ways and means Committee. Commissioner Maffei earned his B.A. in History from Brown University, M.S. in Journalism from Columbia University, and M.P.P. from Harvard University.