The Federal Maritime Commission (FMC) announced today that Michael A. Khouri of Louisville, KY, has been sworn in as a Commissioner for a term to expire on June 30, 2011. Commissioner Khouri was nominated by President Barack Obama on December 3, 2009, and confirmed by the Senate on December 24, 2009. 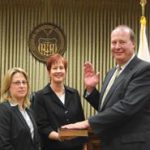 Commissioner Khouri Being Sworn In

Commissioner Khouri comes to the FMC as a 35-year veteran in the maritime industry from positions held in vessel operations, legal and executive positions. He has also served on the boards of directors at the American Waterways Operators Association and the Waterways Council.

Khouri began his career as a deck crewman for Paducah, KY-based Crounse Corp., where he worked his way up from deck hand to towboat captain. He then spent 23 years at Jeffersonville-based American Commercial Lines, a major inland marine company, holding numerous executive positions including General Counsel, Senior Vice President for Law & Corporate Affairs, and Senior Vice President for Transportation Services-marine operations. Khouri then went on to become president and COO of MERS/Economy Boat in Memphis, TN, a maritime fuels and ship chandler, with primary responsibility for company expansion and acquisitions. Most recently, Mr. Khouri worked as an attorney with Louisville-based Pedley & Gordinier PLLC law firm, focusing on transportation and maritime law.

In 1971, Mr. Khouri received his BA in Economics from Tulane University, and in 1980, his JD from the University of Louisville’s Brandeis School of Law. He is also a graduate of the Harvard Business School’s Advanced Management Program.

Commissioner Khouri stated that he is looking forward to working with his fellow Commissioners, participating in the many interesting and challenging decisions and issues facing the Commission and the maritime industry, and working to ensure that shippers and regulated entities, such as ocean common carriers, ocean transportation intermediaries, and ports, are all provided with an efficient and non-discriminatory ocean transportation system.

Chairman Lidinsky stated that he “welcomes Commissioner Khouri’s appointment by President Obama as someone who has both real world and legal expertise to assist the Commission in addressing the maritime and economic issues ahead of us.”

Additionally, Commissioner Dye stated that she “is extremely pleased to welcome Commissioner Khouri to the Commission and looks forward to working with him to address the important policy issues facing the shipping public and the American consumer.”