The generosity of Federal Maritime Commission (FMC) employees in giving $14,457 to the 2017 Combined Federal Campaign (CFC), the federal government’s workplace charity and philanthropy program, was recognized with an “Impact Award”, which was accepted by Acting Chairman Michael Khouri.

The award was presented by Ms. JoAnne O’Bryant, an FMC employee who served as CFC Campaign Vice Chairperson for the Commission, on behalf of Mr. Vince Micone, the Chairman of the Combined Federal Campaign of the National Capital Area.

Also during the ceremony, Acting Chairman Khouri was recognized with a “Best Campaign Awareness Award” for his support of the Combined Federal Campaign and the work of the Federal Maritime Commission employees who spearheaded the CFC campaign at the agency. 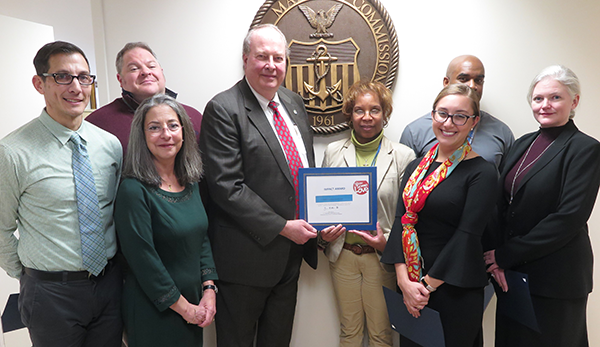 This year’s campaign ran from October 2, 2017 through January 12, 2018 and was led by FMC employees Ms. O’Bryant and Mr. Ian Lane, who served as CFC Campaign Manager. Supporting them in their efforts were six colleagues, known as “Keyworkers”, who were responsible for making staff throughout the Commission aware of the Combined Federal Campaign, its mission, goals, and benefits. Taking on these voluntary duties were: Mr. Alvin Curry; Ms. Jocelyn Jezierny; Ms. Stephanie Kelly; Mr. Alan Lotenberg; Ms. Maryanne Mundy; and Ms. Christine Stavropoulos.

“This Federal Maritime Commission successfully met its fundraising goal for CFC 2017. That accomplishment is directly attributable to the efforts of our CFC volunteer team. Each of these individuals made important contributions to the campaign while still meeting all of their day-to-day responsibilities, and I appreciate all their hard work,” commented Acting Chairman Khouri.