Remarks of Commissioner Sola at Port of Galveston

Albert Shannon, Chairman, Board of Trustees, Port of Galveston

I am Federal Maritime Commissioner Louis Sola and Federal Fact-Finding Officer of the Covid-19 Impact on the Cruise Industry.  The past year has been the most challenging in the history of the cruise industry.  During the past year, I have worked hand in hand with Director Rees through these most difficult times and would like to compliment the Board of Trustees in their confidence in his leadership of Galveston Wharves, the oldest port in Texas, and the 4th largest cruise port in the USA.  Due to the hard work of the port staff, with the coordination with the University of Texas Health Center and state health officials, Galveston Wharves sets the example today for the rest of the nation!  Today is historic, the first step to resumption of cruises happens today in Galveston Wharves and the entire nation is grateful.  All eyes are on TEXAS!

The Galveston area was expected to see over a million passengers to this region that did not show up.  The streets were silent, the hotels were not booked, restaurant tables were empty, nobody ordered ice cream or took taxis or Ubers.  Accordingly, our dock workers were not called upon to provide vital services to the ships, or load supplies or food goods from local suppliers.  The entire state saw an economic impact deficit of 1.8 billion dollars to be part of 43 billion deficit nationally.

But today, we only have to look out at the port to have the feeling things are changing.  I would also like to thank the largest cruise line in the world and its president, Christine Duffy, that is not only present today, but has returned to Texas with two of their ships, Carnival Vista and Carnival Breeze.   Carnival always made it clear and gave us all hope that these ships would only be destined Galveston.  I look forward to Ms. Duffy’s announcement that will provide “esperanza” to the entire industry.

Finally, let me introduce you to my friend and colleague Mr. Carl Bentzel, who, the same as our Chairman, always asks what we can do to get people back to work as a leading advocate on labor issues.  I have always replied, much the same as Davy Crockett, “Come to Texas” and see how they do things there and bring that message back to the Administration, the CDC, and Congress that we are on the path to “cruise forward”. 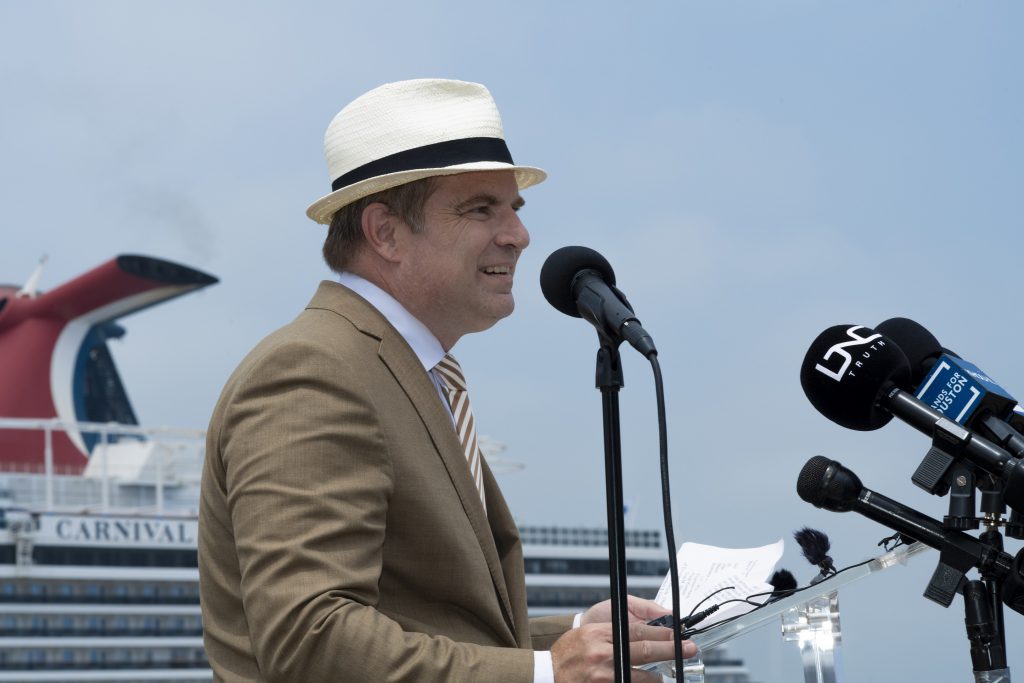