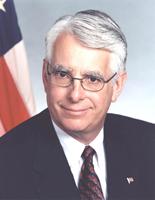 Mr. Blust graduated, in 1971, from the U.S. Merchant Marine Academy at Kings Point, NY, and received a Master of Business Administration degree from Tulane University, in New Orleans, in 1979.

As an active member of trade associations, Mr. Blust previously served as President of the Tampa Bay Cargo Association, Vice President of the Tampa Chapter of the Propeller Club, and was a member of the International Advisory Committees of Enterprise Florida, Tampa Chamber of Commerce and the Hillsborough County Community College. He also was involved in local Tulane and Merchant Marine Academy Alumni associations.

Mr. Blust and his wife, Sharon, have a son, Kristian.