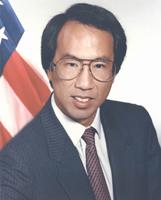 DELMOND J. H. WON served as a Commissioner of the Federal Maritime Commission from August 1994 to August 2003. From 1990 to 1994, he was a Commissioner on the Hawaii Land Use Commission, one of nine appointees of the Governor responsible for rezoning of lands within the state. During this period, he was also a consultant for maritime related issues in Hawaii and served as Vice President of Hawaii Pacific Industries. From 1977 to 1990, he held various positions with Hawaiian Tug & Barge Corp. and Young Brothers, Ltd., where his key responsibilities included the development of: strategic and operating plans, company cases before the Hawaii Public Utilities Commission, operating budgets, analysis of business opportunities, and financial analysis of operating methods and capital asset acquisitions. Born in Honolulu, he received his B.S. in Engineering and his M.B.A. from the University of Hawaii.