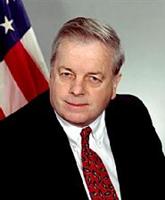 Commissioner Joseph E. Brennan, of Portland, Maine, comes to the Commission to continue a distinguished career of public service. After serving in the U.S. Army, he graduated from Boston College and the University of Maine School of Law. He became a representative in the Maine House in 1965. Mr. Brennan went on to serve as District Attorney for Cumberland County in Maine, as a Maine State Senator, and as the State’s Attorney General. He was elected Governor of the State of Maine in 1979, a position he held until 1987, and also served as Chairman of the Conference of New England Governors and Eastern Canadian Premiers. He subsequently served in the U.S. House of Representatives until 1991, and then entered private practice as an attorney in Washington, D.C.