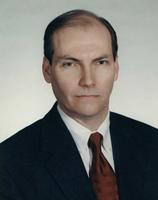 Before taking his oath of office at the Federal Maritime Commission, Commissioner Moran served as Vice President – Legislative Affairs for the American Waterways Operators (AWO), the national trade association representing the inland and coastal tugboat, towboat and barge industry. Prior to that position, Commissioner Moran was a partner at the government and public affairs firm of Alcalde & Fay, where he represented a number of clients on legislative initiatives.

During his four years as Republican Counsel on the Senate Committee on Commerce, Science and Transportation, Commissioner Moran served as Counsel to both the Merchant Marine Subcommittee and the National Ocean Policy Study. As Counsel to these committees, he drafted legislation and prepared hearings on numerous legislative issues, including the enactment of the Oil Pollution Act of 1990, a review of the Shipping Act of 1984, reform of federal support for the U.S.-flag fleet, and many other maritime, environmental and marine fisheries matters.

Prior to serving with the Senate Commerce Committee, Commissioner Moran served as Legislative Counsel for Senator John Warner and held a Republican staff position on the House of Representative’s Merchant Marine and Fisheries Committee. Before coming to Washington, D.C., Commissioner Moran practiced law in Norfolk, Virginia, with the firm of Wilcox and Savage. He began his career as a Judicial Clerk to the Honorable Richard B. Kellam in the United States District Court for the Eastern District of Virginia.