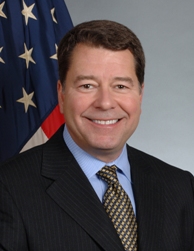 HAROLD J. CREEL, JR., of South Carolina, was nominated by President Clinton to a five year term on the Commission on July 1, 1994 and was confirmed by the United States Senate on August 17, 1994. Mr. Creel was nominated to his third term by President George W. Bush on November 16, 2004, and confirmed by the Senate on November 20, 2004. His current term expires on June 30, 2009. He served as Chairman of the Commission from February 1996 to August 2002.

Prior to his service for the Commerce Committee, Mr. Creel was an attorney with the National Oceanic and Atmospheric Administration (NOAA) of the Department of Commerce. In that capacity, he acted as the chief staff attorney on issues pertaining to endangered marine species. While at NOAA, he assisted the Department of Justice in administrative proceedings and litigation of cases involving endangered species issues. He also wrote, negotiated, and reviewed regulations implementing NOAA’s legal authority.

A native of Florence, S.C., Mr. Creel attended Wofford College in Spartanburg, S.C., and graduated in 1979 with a B.A. in Political Science. He attended the University of South Carolina School of Law where he wrote a South Carolina Law Review article entitled “Barrier Islands: The Conflict Between Federal Programs that Promote Preservation and Those that Promote Development.” He graduated from law school in 1982 and moved to New Orleans to practice in a law firm specializing in admiralty.